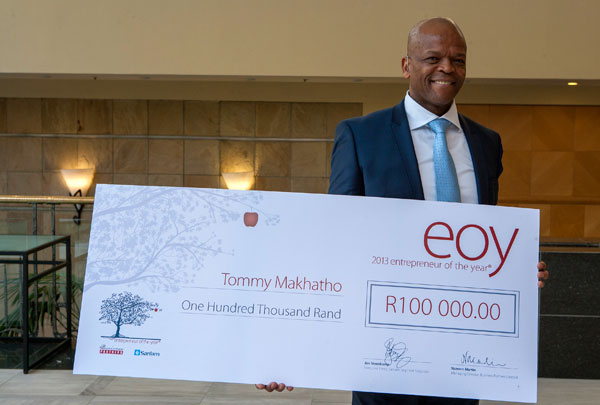 After navigating a grueling judging process and competing with 13 other finalists, Tommy Makhatho, owner of BiBi Cash & Carry, a retail group situated in the rural area of Qwa Qwa in the Free State, has been named the 2013 Sanlam / Business Partners Entrepreneur of the Year® at an awards ceremony which was held in Johannesburg on Wednesday, 4 September 2013.

Due to the significant contribution he has made in his local community by providing jobs to more than 680 employees, Makhatho has also been named the 2013 Sanlam / Business Partners Entrepreneur of the Year Job Creator of the Year®.

In addition to his job creation achievements, Makhatho also assists fellow entrepreneurs by allowing smaller retailers to make use of the BiBi Cash & Carry brand name, in exchange for support and access to company information. The retailer also offers an in-house learnership programme to its staff, which transfers critical tools and skills to employees of all levels.

Makhatho presently owns seven BiBi Cash & Carry stores, which is currently South Africa’s largest entirely black owned retail operation, and is involved with 32 express stores, which he actively assisted in starting. Since the first store was launched in 1984 this retail group has grown in profit and size significantly.

According to Kobus Engelbrecht, a member of the judging panel of the 2013 Sanlam / Business Partners Entrepreneur of the Year ® awards, the success and perseverance Makhatho has displayed in a very competitive market makes him a truly worthy winner and an inspirational role model to aspiring entrepreneurs both within his community and the country as a whole.

“It is clear that Tommy understands the needs of the market segments in which he does business very well. This, coupled with his meticulous attention to detail, and an unrelenting will to continuously seek ways to add to his bottom line, makes him a worthy winner,” says Engelbrecht.

Born and raised in Soweto, Makhatho is a true example of an entrepreneur, having only been an employee for two years of his life. After starting his career as a waiter in Johannesburg many years ago, he made the bold decision to start his first entrepreneurial venture, which was a hair salon, and has not looked back since.

He says that the business has a competitive advantage over the bigger retail chains in the area due to his team’s superior local knowledge, its flexibility as a smaller regional player, as well as its determination to operate close to the townships and communities where most of its consumers reside.

“Being recognised, especially in a sector as competitive and fast as ours, which happens to be dominated by giants such as Shoprite and Spar, brings us great joy and inspiration. Winning the Sanlam / Business Partners Entrepreneur of the Year® award gives us an opportunity to display how an organisation can grow from nothing into a flourishing business, and all it takes is love, hard-work and most important, passion, to achieve it,” concludes Makhatho.